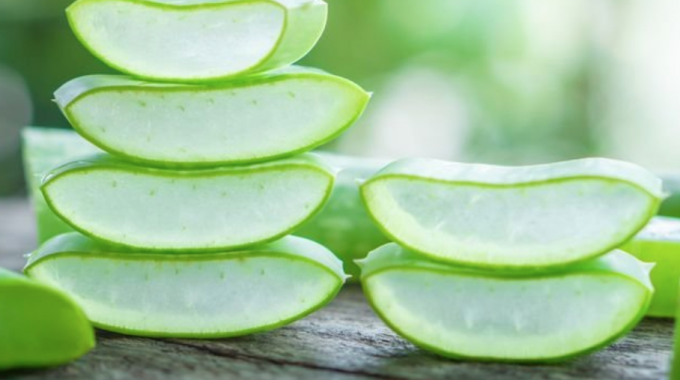 When you skimp on the sunscreen (unintentionally, of course) and end up with a monster sunburn, chances are you turn to aloe vera gel to soothe your scorched skin. Because it brings so much relief during the healing process—almost like a gooey superhero—you’ve probably wondered what else aloe vera gel is capable of.

“Aloe vera is a cactus-like plant known for its healing and medicinal properties,” says Joel Schlessinger, M.D., Omaha-based board-certified dermatologist and cosmetic surgeon. “Its stems store water, creating a clear, gel-like substance in the leaves, which contains vitamins, antioxidants, minerals, and amino acids.” The gel from aloe has been used throughout history to treat a variety of skin conditions, such as burns, frostbite, psoriasis, and cold sores, research shows.

So does all the hype surrounding aloe vera gel mean you should make it a permanent fixture in your skin care routine? While research is currently limited on the benefits of aloe vera gel specifically, it does contain many well-studied vitamins and minerals, such as vitamins C and E, leading experts to believe that it may offer an assist to the products already in your arsenal.

Curious about its uses? Read on to discover all of the skin-saving benefits of aloe vera.

What is Aloe Vera Gel, Exactly?

Each triangular leaf of the aloe vera plant is composed of three layers, with the innermost layer containing a clear gel that’s made up of 99% water and roughly 75 potentially active ingredients, according to a review published in the International Journal of Research and Medical Sciences. The inner leaf juice is removed from the rind, either by machine or hand, and is cold-pressed to keep the active ingredients, well, active.

When it comes to solving specific skin issues, there’s not a lot of conclusive evidence on aloe vera’s efficacy, but “the biochemistry of aloe vera does have some anti-viral, anti-fungal, and cell-regenerative properties, so applying it to the skin in addition to other medications or remedies may prove to be helpful,” says Dr. Schlessinger.

What makes aloe vera gel so tricky to study is the fact that it contains oodles of promising ingredients that can improve the skin—so many, that it’s hard to hone in on the exact compounds and mechanisms involved. Plus, each study uses its own aloe vera composition, making it difficult to compare and contrast the research that’s completed.

But even though aloe vera gel won’t correct your skin issues on its own, when used in conjunction with other products, it may help speed the process along.

The Skincare Benefits of Aloe Vera

Inflammation underlies many skin conditions (think: psoriasis, eczema, and lichen planus), says Jennifer Gordon, M.D., board-certified dermatologist at Westlake Dermatology in Austin, Texas. Aloe vera gel contains compounds, such as acemannan, that suppress inflammation by showing the enzymes that trigger it who’s boss. (Make sure to do a patch test before putting it on inflamed skin, as aloe vera can cause allergic contact dermatitis in some people.)

Because aloe vera gel is mostly water, it helps to hydrate the skin without that post-application greasy feeling, says Dr. Schlessinger. It helps lock moisture into the skin, while also acting as a glue that makes the top layer of skin cells stick together, ultimately smoothing and softening your skin.

Besides having serious antibacterial skills, aloe vera gel contains salicylic acid, which is an exfoliant that helps to unclog pores, making it especially helpful if you deal with pimples and blackheads. Bonus: It also acts as an anti-inflammatory on the oil glands that cause acne, says Dr. Mark.

“Aloe vera is an antiseptic, containing six agents known to help inhibit fungi, bacteria, and viruses, including salicylic acid, phenols, and sulfur,” says David Lortscher, M.D., California-based board-certified dermatologist and CEO of Curology. It may help speed up the healing process too, by creating antibodies the immune system can use to fight the cold sore virus.

Aloe stimulates fibroblast activity, says Dr. Mark, which creates an uptick in collagen production and elastin fibers that make the skin less wrinkled and more elastic. Meanwhile, zinc acts as an astringent to tighten pores, and antioxidants, such as vitamins C and E, help prevent the formation of free radicals (aka, molecules that can do a number on your cells).

Aloe vera gel prevents tyrosinase, the enzyme responsible for skin discoloration, from doing its thing, essentially suppressing UV-induced hyperpigmentation and the skin-damaging effects of sunburns, says Dr. Gordon. This mechanism may also help in the prevention of dark spots, while the various antioxidants it contains (such as glutathione peroxide) may fade sun damage that’s already formed.

The salicylic acid aloe vera contains acts as an exfoliator, helping to gently slough off dead skin cells, says Dr. Mark. It also contains lignin, a substance which can enhance the penetrative effect of other ingredients into the skin.

How to Choose the Best Aloe Vera Gel

Keep these tips from dermatologists in mind before you commit to a bottle of aloe.

The higher the percentage, the better.

“Purest aloe is always best, without anything added, such as other ingredients to supposedly make it ‘better,’” says New York-based board-certified dermatologist Gary Goldenberg, M.D.

Dr. Gordon agrees: “If the percentage of aloe vera is low, that means it contains many other additives, such as thickeners, preservatives, colors, and fragrance.”

These additional (and unnecessary) ingredients may make the aloe vera less effective. Although some preservation is necessary—hence why there’s no such thing as 100% aloe vera gel—try to find one that has the least number of ingredients, and the highest percentage of aloe vera.

Watch out for tricky wording.

“To be sold in many outlets, often there must be some type of preservative to extend shelf-life and protect from microbes,” says Dr. Gordon, but aloe vera gels that are labeled as having a shorter shelf-life might mean a cleaner product.

Alcohol denat and cetyl alcohol, for example, can be irritating to the skin, says Dr. Lortscher. The same goes for fragrance, even those from essential or natural oils, which are often a culprit of contact dermatitis. Finally, aloe vera should be clear—there’s no reason for it to be green.

6 Rules for Using Citrus on Skin

Why Your Skin Craves Oatmeal