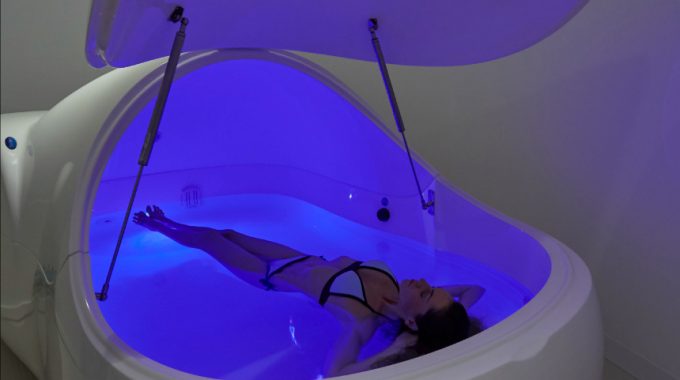 Floatation Therapy or floating is one of the most accessible and relaxing pain relieving therapies available today.  Floating, for the majority of those who first try it, is a wonderful, safe and effective tool for navigating our modern society. But for a few, the float experience can evoke a temporary sense of motion sickness or nausea, which can limit its relaxing feeling and other potential benefits.

Forget the rollercoaster, motion sickness can occur not only during physical motion, but visual and virtual motion – all three of which can happen while floating in a float tank – especially due to variations in weightlessness and postural control of the head and neck muscles while floating effortlessly in a face up position.

Movements of the head and torso can alter reflexes of the eyes and inner ear and affect equilibrium – especially if you are in complete darkness. Even small movements can create proportionally disruptive waves within the tank.

Ever get that “pit” in your stomach? That gut feeling we get in times of high anxiety or emergency situations is triggered by one of our cranial nerves, the vagus nerve, which directly communicates to and from our organs and brain, including the stomach and intestines. This can be fueled by chronic stress, stimulating cortisol production from the adrenal gland which can lead to increased heart rate, fatigue, headache and nausea.

Defying gravity in skin temperature water can create a paradoxical effect where the body gets so relaxed that the mind turns inward and temporarily magnifies internal sensations and thoughts, including those of anxiety or stress. While rare, this can be perceived as a feeling of motion sickness and is often seen with TBI (traumatic brain injury) or concussion, where an auditory or visual trigger like the vibration, post-float, of the filtration system or a blue light will bring on nausea.

Stress and anxiety are not the only causes of nausea. Sometimes, what and when you last ate or drank may be the reason. Dehydration is a common reason for nausea while floating, especially during the heat of the summer months. Further, floating stimulates the parasympathetic nervous system – our “rest and digest” vs. our “fight or flight” pathway – which explains why the associated state of deep relaxation that accompanies floating also stimulates digestion. This is why gurgling sounds are often heard, why some emerge hungry after the float, and why some sometimes feel nauseous when we are actually hungry. Of course you can also feel nauseous if you ate three greasy cheeseburgers shortly before floating, too.

Another reason could be environmental.  The temperature of the float tank should be between 93.5º and 95º at all times.  There should be some air flow into the tank so it does not get too stuffy.  Sometimes, the water and air temperature creates high humidity in the tank which can have a negative effect possibly resulting in nausea.  While this is a common reason for nausea, many times the same sensations can be chalked up to anxiety, as anxiety disorders both mild and severe can magnify reactions in our body.

Some people have actual physiologic disorders, such as postural orthostatic postural hypertension (“POTS”) or a condition where going from a lying to standing can cause blood pressure variations. POTS is often be associated with motion sickness. Others have medical conditions requiring medications such as blood pressure, statins, and antibiotics that can cause nausea. Intense physical or generalized chronic pain while floating can be such a sudden change of physical sensation that it can affect your “gut reaction” in the same ways as described above.

Overall, floating for most people provides a sense of pain relief and relaxation that is unparalleled. If you try it once and find that you are stomach or motion sensitive, it’s worth trying a second time, as it might be a simple fix such as hydrating, eating a small bite before floating, or requesting a temperature adjustment with the water or air temperature. And for a select few, floating may just not be for you.

What is Epsom salt? Epsom salt, named for a bitter saline spring at Epsom in…

Why combine a Massage and a Float?

So what is floating exactly? Floating is the groundbreaking practice of putting the human body…

Floatation Therapy Is Not Just For Athletes, Here’s Why

Floatation therapy dates back to the 1950s, but it’s become a trend in the health…