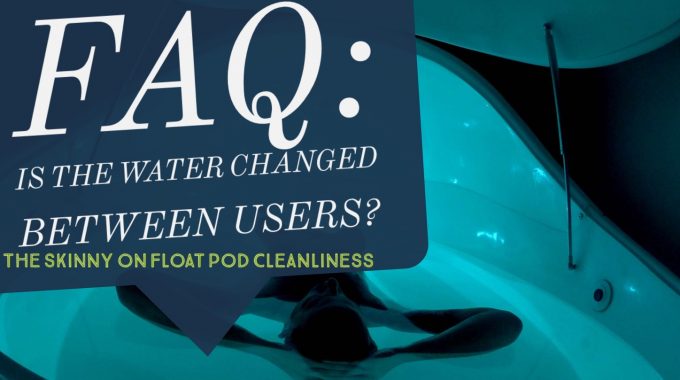 The Float Tank Association (yes – it exists!) has created the US Float Tank Standards – a stringent set of regulations regarding sanitation, cleaning, and maintenance. They state the water should be changed every 1000 floats or every 6 months.

Public swimming pools and hot tubs are used by many at once and the heath department regulations state that all the water must be filtered once every 6 hours. Our Pods are designed to filter the water 24/7 when the Pod is not in use.

Our Pods will filter the ENTIRE contents of the tank 3-5 times between each single user.

Each Pod contains about 1,100 pounds of magnesium sulfate (Epsom salt) which is a natural antimicrobial. In reality, the salt content in the Pod is so high that bacteria can’t survive. Researchers have actually injected bacteria into this concentration and it died very quickly.

Additionally, we use Hydrogen Peroxide as a natural disinfectant. Using Hydrogen Peroxide (or H2O2) in our water is the primary way Soma Float keeps the float pod water clean. Hydrogen Peroxide has historically been used to sterilize medical instruments, used for water treatment and even to bleach paper products. H2o2 is widely being used in pools and spas as a healthier alternative to chlorine and bromine which can have negative affects on the skin.

Surely that’s enough to cover our bases, right? Probably true, but the float tank industry is committed to the highest standard of cleanliness and Pods often exceed the requirements of the health departments…so there’s more!

As humans, we’re able to tolerate the UV rays of the sun. Bacteria, viruses, and molds aren’t so lucky.

UV works to purify by damaging cellular DNA—when anything undesirable in the pod meets these purifying rays, they are killed. UV treatment protects against viruses (including Hepatitis, which is resistant to chlorine), molds and bacterias.

You know that heavenly smell in the air after a summer thunderstorm? We can thank Ozone for that! It’s (O3) comprised of 3 oxygen atoms, however, it’s unstable like this, thus causing a release of one of the atoms. When this extra oxygen comes in contact with anything undesirable in the water, it’s almost immediately oxidized and, thus, purified.

Ozone kills bacteria 3,000 times faster than chlorine and has 50 times the power.

It eliminates organic material and viruses in addition to bacteria, mold, and yeast.

Talk about layers and layers of cleanliness, sanitation and protection! Also, don’t forget that each user showers before even entering the tank.

Summary of Our Filtration stages:

Can Float Therapy help with addiction?

By: Alexandra Sirocky It doesn’t matter who you are or where you come from, in…

Benefits of Float Therapy in Winter

Floatation Therapy Is Not Just For Athletes, Here’s Why

Floatation therapy dates back to the 1950s, but it’s become a trend in the health…