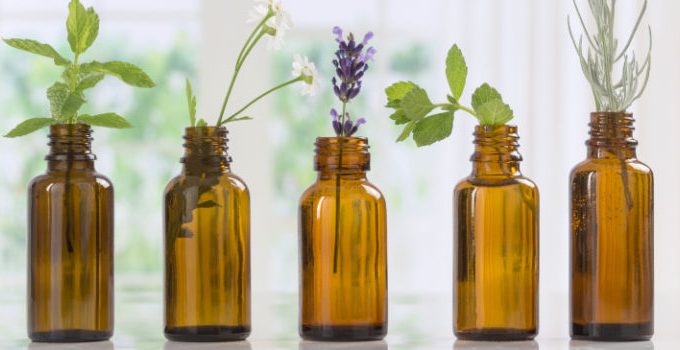 There are essential oils for hormones that may help to balance your estrogen, progesterone, cortisol, thyroid and testosterone levels.

Some oils, such as clary sage, geranium and thyme, help to balance out estrogen and progesterone levels in your body, which can improve conditions like infertility and PCOS, as well as PMS and menopause symptoms. A 2017 published in Neuro Endocrinology Letters indicates that geranium and rose have the ability to influence the salivary concentration of estrogen in women. This may be helpful for women who are experiencing menopausal symptoms that are caused by declining levels of estrogen secretion.

Many essential oils have anti-inflammatory, antiviral, antibacterial, antiseptic and anti-fungal properties that help to boost your immune system and fight infections. The chemical substances found in the oils, such as terpenes, esters, phenolics, ethers and ketones, have the potential to fight foreign pathogens that can threaten your health. Some of the best essential oils for your immunity include oregano, myrrh, ginger, lemon, eucalyptus, frankincense, peppermint (or Mentha piperita) and cinnamon.

Studies have shown that essential oils effectively destroy several fungal, viral and bacterial pathogens, including methicillin-resistant Staphylococcus aureus, Helicobacter pylori and Candida albicans infections. Because antibiotic resistance is becoming such a major threat in modern health care, using these oils as a form of independent or combination therapy can help to fight bacterial infections in a safer and more natural way.

Choose oregano oil for powerful immune-boosting properties, as it’s displayed both antiviral and antibacterial properties in lab research. Oregano oil contains carvacrol and thymol, two compounds that have antimicrobial effects and can inhibit the synthesis and growth of several types of bacteria.

Frankincense also demonstrates anti-cancer, anti-inflammatory and anti-tumor effects when tested in lab studies and on animals — specifically, helping to fight the cells of specific types of cancer.  A 2012 study showed that a chemical compound found in frankincense called AKBA may kill cancer cells that have become resistant to chemotherapy.

Another researched essential oils benefit is their role in aiding and improving digestion. Some oils help to relieve upset stomach, indigestion, diarrhea, stomach spasms and even conditions of the gastrointestinal system, such as IBS. Oils can also aid your digestion by helping to stimulate digestive enzymes that make it easier to break down and absorb the nutrients, fats and protein that you need.

Ginger essential oil, for example, is known to promote your digestive health by easing indigestion, constipation and ulcers. A study published in the World Journal of Gastroenterology found that ginger oil stimulated gastric emptying in people with indigestion. Ginger oil is also used to relieve gas, reduce nausea and ease abdominal pain.

Another useful essential oil for digestion is peppermint. Research shows that peppermint oil works to provide rapid relief of IBS symptoms. In a 4-week, randomized, double-blind, placebo-controlled clinical trial, 72 patients with IBS received either peppermint oil or placebo. The peppermint group experienced a 40 percent reduction in total IBS symptoms after 4 weeks, which was superior to the 24 percent decrease of symptoms reported by the patients in the placebo group. After just 24 hours of using peppermint oil, the treatment group experienced a decrease in symptoms of 19.6 percent.

Some other essential oils that may be helpful for digestion include fennel, lemongrass, marjoram, black pepper and juniper berry.

Did you know that essential oils can help to boost your energy levels and even improve your athletic performance? Some oils have stimulating effects and can actually increase oxygen to your brain, which will leave you feeling refreshed, focused and energized.

A study published in the Journal of the International Society of Sports Nutrition found that peppermint oil increased brain oxygen concentration, improved exercise performance and reduced exhaustion in healthy male athletes who consumed peppermint oil with water for 10 days.

Some other great essential oils for energy include grapefruit, lemon, lemongrass, eucalyptus and rosemary.

With neuroprotective effects and cognitive performance boosting abilities, essential oil benefits have helped many people who are suffering from neurodegenerative diseases like Alzheimer’s and dementia. In a scientific review published in Frontiers in Aging Neuroscience, researchers found that because essential oils possess powerful antioxidants that work to inhibit free radical scavenging, they help to naturally improve brain function and reduce inflammation.

Essential oils have also shown to improve learning, memory and ability to focus. Both stimulating and sedative oils can be useful, as oils like peppermint can improve sustained attention over a longer period of time, while oils like lavender can be useful for people going through tough exercises or situations. Furthermore, they can be useful in relieving agitation in individuals with dementia. This is due to their calming and sedative effects.

Perhaps one of the most well-known essential oils benefits is their ability to reduce stress and anxiety. Some have sedative properties and induce a calm, peaceful, uplifting and relaxed feeling. The best essential oils for anxiety and stress include lavender, Roman chamomile, bergamot, ylang ylang, orange, rose, frankincense and vetiver.

A pilot study published in Complementary Therapies in Clinical Practice found that the use of aromatherapy as a complementary therapy helped to reduce anxiety and depression scales in postpartum women. Women between zero and 18 months postpartum were divided into either a treatment group that inhaled a blend of rose and lavender oils or a control group that didn’t receive any type of aromatherapy. After four weeks, the women using aromatherapy had significant improvements in anxiety and depression symptoms compared to those in the control group.

And a 2014 study involving 82 participants evaluated the effectiveness of aromatherapy for elderly people with chronic pain and symptoms of anxiety and depression. Researchers found that after four weeks of treatment with essential oils, there was a significant reduction in negative emotions, including feelings of anxiety, stress and depression, among the intervention group.

These are just some of the studies that have displayed the anti-anxiety and stress-relieving capabilities.

According to a systemic review and meta-analysis published in Pain Research and Treatment, there is a significant positive effect of aromatherapy, compared to placebos or control treatments, in reducing pain. Researchers evaluated 12 studies on this topic and found that essential oils were especially helpful in treating postoperative pain, obstetrical pain and gynecological pain.

There are many oils that may be applied topically or used aromatically to reduce body aches and pains. One study that displays this essential oil benefit evaluated the efficacy of these oils on neck pain. For the study, the experimental group received a cream that was composed of marjoram, black pepper, lavender and peppermint oils, and the control group used an unscented cream. The creams were applied for 4 weeks, directly to the painful area after bathing. Researchers found that the experimental group had improved pain tolerance in the neck and showed significant improvement in the 10 motion areas that were measured.

Using essential oils on your skin and in hair and beauty products is a natural and effective way to keep up your personal care regimes without having to use products that are made with chemicals and hydrogenated oils. Essential oils may calm irritated skin, reduce signs of aging, like age spots, improve acne, protect your skin from sun damage and thicken your hair.

According to a review published in Evidence-Based Complementary and Alternative Medicine, “at least 90 essential oils can be identified as being recommended for dermatological use, with at least 1,500 combinations.” What gives these oils their skin benefits is their ability to fight against pathogens that are responsible for dermatological infections. Oils can also help to improve inflammatory skin conditions, like dermatitis, eczema and lupus, improve the general appearance of your skin and even aid wound healing.

There are also quite a few studies that have found essential oils to be helpful for hair growth. One such study, conducted in 2015, evaluated the efficacy of rosemary oil on patients with androgenetic alopecia, or male or female pattern baldness. Patients were randomly assigned to rosemary oil or minoxidil (a medication commonly used for hair loss) for a six-month treatment period. Researchers found that both groups experienced a significant increase in hair count at the six-month endpoint. They also indicated that scalp itching was more frequent in the minoxidil group.

Using detoxifying oils can help your body to flush out these toxins and it can clean the air of your home, too. In fact, unlike most home cleaning products that are loaded with chemicals, essential oils can naturally clean your home by destroying harmful pathogens and pollutants.

The best oils for reducing toxicity in your home or place of work include grapefruit, orange, lemon, lemongrass, eucalyptus, cinnamon, peppermint and tea tree.

Essential oils may work as natural headache and migraine relievers because they effectively treat the trigger, addressing the root of the problem instead of masking it, like painkillers do. Essential oils for headaches provide pain relief, improve circulation and reduce stress, which can be a major cause of both headaches and migraines.

A placebo-controlled clinical trial conducted in 2012 evaluated the efficacy of inhaling lavender oil for the treatment of migraine headaches. Forty-seven patients with migraines were divided into two groups — one that inhaled lavender oil for 15 minutes and one that used a color and odorless liquid.

After asking the patients to record their headache severity and associated symptoms every 30 minutes for a total of 2 hours, researchers found that the difference between the controls and treated patients was statistically significant. From 129 headache attacks in the treatment group, 92 responded entirely or partially to lavender. In the control group, 32 out of 68 headache attacks responded to the placebo.

Aside from lavender, some other oils that can help to relieve headache pain include peppermint, which has a cooling effect and stimulates blood flow, eucalyptus, which relieves sinus pressure by opening the nasal airways, and rosemary, which reduces inflammation, promotes circulation and has a calming effect.

Some essential oils have sedative properties, which can be helpful for people who are having trouble falling asleep or sleeping through the night. Lavender oil, in particular, is known to be an effective sleep aid because of its ability to leave you feeling relaxed and calm. Some other oils that can be used to promote restful sleep include Roman chamomile, ylang ylang, bergamot and vetiver.

A 2014 systematic review conducted at the University of Minnesota evaluated 15 quantitative studies, including 11 randomized controlled trials that examined the effects of essential oils on sleep. Researchers found that a majority of the study findings suggest a positive effect of oils on sleep deprivation and disturbances. Lavender oil was the most frequently studied oil and of all evaluated studies, no adverse events were reported. (20)

Another recent study, this one published in Nursing in Critical Care, investigated the effects of lavender oil on sleep quality among patients in the coronary intensive care unit (ICU). Sixty patients participated in the study and they were divided into the intervention group or the control group.

The intervention group inhaled lavender oil for 15 days and researchers found that they showed significantly significant differences in their sleep quality compared to the control group that received no form of therapy. Researchers pointed out that lavender oil is a non-invasive, inexpensive and easily applicable intervention for hospital patients who are having trouble sleeping and experiencing anxiety.

13 Uses For Lavender Oil: The Only Essential Oil You’ll Need

If you only use one essential oil, this is it! Lavender (lavandula angustifolia) is the…

You’ve probably been hearing a lot about essential oil uses and benefits lately. And in…